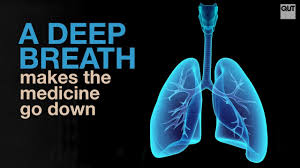 A new technique for treating lung cancer by inhaling nanoparticles created at Wake Forest School of Medicine, part of Wake Forest Baptist Health, has been reported by researchers.

As part of the proof-of-concept study, Dawen Zhao, MD, PhD, associate professor of biomedical engineering at Wake Forest School of Medicine, made use of a mouse model to ascertain whether metastatic lung tumors responded to an inhalable nanoparticle-immunotherapy system in combination with the radiation therapy that is usually used for the treatment of lung cancer.

The study has been reported in the current issue of Nature Communications.

The second most common type of cancer is lung cancer, which is also the leading cause of cancer-related deaths among both men and women. More people die due to lung cancer compared to breast, colon, and prostate cancers combined. Immunotherapy looks promising, but at present, it works in less than 20% of patients suffering from lung cancer.

Considerable clinical evidence indicates that during diagnosis, the tumors of a majority of the patients are poorly infiltrated by immune cells. Such a “cold” immune environment in tumors inhibits the immune system of the body from identifying and destroying the tumor cells.

WATCH: “A Deep Breath Makes the Medicine Go Down”

QUT pharmaceutical scientist Dr. Nazrul Islam, from School of Clinical Sciences, said lung cancer was one of the most common cancers globally and one of the deadliest, being a leading cause of cancer deaths. Credit: Queensland University of Technology

According to Zhao, the ability to overcome such an immunosuppressive tumor environment to work efficiently against the cancer is now an area of keen interest among the scientific community.

Earlier techniques include directly injecting immunomodulators into tumors to improve their immune response. But this technique is usually restricted to surface and tumors that can be easily accessed. Thus, it can be less effective if repeated injections are required to preserve immune response.

The goal of our research was to develop a novel means to convert cold tumors to hot, immune-responsive tumors. We wanted it to be non-invasive without needle injection, able to access multiple lung tumors at a time, and be safe for repeated use. We were hoping that this new approach would boost the body’s immune system to more effectively fight lung cancer.

The nanoparticle-immunotherapy system developed by Zhao and his colleagues administered immunostimulants through inhalation to a mouse model of metastatic lung cancer. When the immunostimulant-loaded nanoparticle was deposited in the air sacs of the lungs, they were absorbed by one particular type of immune cells, known as antigen-presenting cells (APC).

Then cGAMP, an immunostimulant in the nanoparticle, was discharged within the cell, where the APC cell was activated by the stimulation of a specific immune pathway (STING). This is a crucial step in inducing systemic immune response.

The researchers also demonstrated that when the nanoparticle inhalation was combined with radiation applied onto a part of one lung, the result was the regression of tumors in both lungs and prolonged survival of the mice. Moreover, the researchers noted that it thoroughly removed lung tumors in a few of the mice.

The researchers then performed mechanistic studies and showed that the inhalation system transformed the initially cold tumors in both lungs to hot tumors desirable for powerful anti-cancer immunity.

The inhalable immunotherapy developed by Zhao offers various key benefits to earlier techniques—specifically the capability to access deep-rooted lung tumors, since the aerosol that carries the nanoparticulate was designed such that it reaches all portions of the lung—and the viability of repeated treatment by employing a non-irritating aerosol formulation.

It was demonstrated that the treatment was well-tolerated and safe without any adverse immune-related distress in the mice.

The Wake Forest School of Medicine scientists have filed a provisional patent application for their inhalable nanoparticle-immunotherapy system. 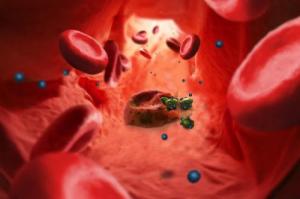 Understanding how nitrite can improve conditions such as hypertension, heart attack and stroke has been the object of worldwide research studies. New research from Wake Forest Univ. has potentially moved the science one step closer to this goal.

In a paper published online in the Journal of Biological Chemistry, senior co-author Daniel Kim-Shapiro, professor of physics at Wake Forest, and others show that deoxygenated hemoglobin is indeed responsible for triggering the conversion of nitrite to nitric oxide, a process that affects blood flow and clotting.

“We have shown that conversion of nitrite to nitric oxide by deoxygenated hemoglobin in red blood cells reduces platelet activation,” Kim-Shapiro said. “This action has implications in treatments to reduce clotting in pathological conditions including sickle cell disease and stroke.”

In 2003, Kim-Shapiro collaborated with Mark Gladwin, now at the Univ. of Pittsburgh, who led a study that showed that nitrite (which is also used to cure processed meats), is not biologically inert as had been previously thought, but can be converted to the important signaling molecule nitric oxide (NO), and thereby increase blood flow. At that time, the researchers hypothesized that the conversion of nitrite to NO was due to a reaction with deoxygenated hemoglobin in red blood cells.

The main goal of the latest research, Kim-Shapiro said, was to determine how red blood cells perform these important signaling functions that lead to increased blood flow. The researchers used several biophysical techniques to measure NO production from nitrite and red blood cells and examined the mechanism of NO production.

“Importantly, this action was increased under conditions of low oxygen—so nitrite acts to increase blood flow in the body just when it is needed. What we’re showing with this research is what part of the red cell is doing this, and it’s consistent with our original hypothesis,” he said. “This speaks to the mechanisms and how they work—to how nitrite is dilating blood vessels and reducing clotting.”

As director of Wake Forest Univ.’s Translational Science Center, Kim-Shapiro and others have conducted studies that look at how nitrite and its biological precursor, nitrate (found in beet root juice) can be utilized in treatments for a variety of conditions. In a 2010 study, they were the first to find a link between consumption of nitrate-rich beet juice and increased blood flow to the brain.

Kim-Shapiro said that next steps in the research include examining whether all red blood cells have this activation function and whether this function is diminished in red cell diseases like sickle cell disease, other blood diseases or in the transfusion of older blood.

“Does this important function that we can now attribute to the hemoglobin in the red cells get compromised under certain conditions? And if so, how can we enhance it?” he said.