A step towards new “beyond lithium” rechargeable batteries with superior performance has been made by researchers at the University of Bath.

We increasingly rely on rechargeable batteries for a host of essential uses; from mobile phones and electric cars to electrical grid storage. At present this demand is taken up by lithium-ion batteries. As we continue to transition from fossil fuels to low emission energy sources, new battery technologies will be needed for new applications and more efficient energy storage.

One approach to develop batteries that store more energy is to use “multivalent” metals instead of lithium. In lithium-ion batteries, charging and discharging transfers lithium ions inside the battery. For every lithium ion transferred, one electron is also transferred, producing electric current. In multivalent batteries, lithium would be replaced by a different metal that transfers more than one electron per ion. For batteries of equal size, this would give multivalent batteries better energy storage capacity and performance.

The team showed that titanium dioxide can be modified to allow it to be used as an electrode in multivalent batteries, providing a valuable proof of concept in their development.

The scientists, an international team from the University of Bath, France, Germany, Holland, and the USA, deliberately introduced defects in titanium dioxide to form high concentrations of microscopic holes, and showed these can be reversibly occupied by magnesium and aluminium; which carry more than one electron per ion.

The team also describes a new chemical strategy for designing materials that can be used in future multivalent batteries.

The research is published in the journal Nature Materials.

Dr Benjamin Morgan, from the Department of Chemistry at the University of Bath, said: “Multivalent batteries are a really exciting direction for battery technology, potentially offering higher charge densities and better performance. New battery technologies are going to be more and more important as we wean ourselves off fossil fuels and adopt greener energy sources.

“There are quite a few technical hurdles to overcome, including finding materials that are good electrodes for multivalent ions. We’ve shown a way to modify titanium dioxide to turn it into a multivalent electrode.

“In the long term, this proof of concept is a possible step towards “beyond lithium” batteries with superior performance.”

Research into organic semiconductors could lead to more efficient LED TVs and flexible solar cells that are cheaper to make and take less energy to produce according to researchers at the University of Bath.

Semiconductors are used in devices such as LED TVs to convert electric current to light; and in photovoltaic cells, which absorb light energy and convert it into electricity. Traditionally ‘inorganic semiconductors’, often based on silicon, are used in such devices. However these are relatively difficult to make and take a lot of energy to produce.

It is estimated that solar cells made from silicon can take a year to pay back the total energy consumed in their manufacture. 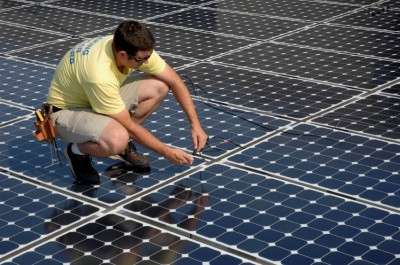 Semiconductors are used in devices such as LED TVs to convert electric current to light; and in photovoltaic cells, commonly known as solar panels, which absorb light energy and convert it into electricity.

Despite efforts over the last three decades to develop organic semiconductors on a mass scale, scientists have been challenged by the fact that this type of semiconductor is less efficient at conducting electricity.

Now, a team from the University of Bath, collaborating with scientists in Germany and The Netherlands, has identified how the electronics industry could overcome some of the existing problems associated with using organic semiconductors.

Dr Daniele Di Nuzzo, Research Officer in Physics at the University and first author on the paper, explained: “Conventional semiconductor devices are tricky to make because they first require the production of crystalline materials. Because of this, they also use up a lot of energy to be produced.

“However they have a disordered structure and conduct electrical charges less well than silicon.”

One way of improving the electrical properties of organic semiconductors is to mix them with ‘doping’ molecules, which work by adding electrical charges to the polymer.

Dr Di Nuzzo added: “It’s difficult currently to implement the doping technique in an effective way to produce organic semiconductor devices that work with high performances. Our research shows why this is the case and suggests how we can improve the performance of these materials.”

The study, published in the journal Nature Communications, found that the size and geometrical position of the doping molecule used had an effect on the efficiency of the semiconductor material.

Dr Enrico Da Como from the University’s Department of Physics, led the study. He explained: “The organic polymer consists of a chain of units which is mixed with the doping molecule before it is printed onto a surface. We found that the doping molecule can bind to the polymer in several different orientations, some of which make a more effective semiconductor than others.

“Our work suggests that if you use a larger doping molecule, you limit the number of ways it can bind to the polymer, making the efficiency of the semiconductor more consistent.”

MIT researchers expand the range of quantum behaviors that can be replicated in fluidic systems, offering a new perspective on wave-particle duality.

Image: Dan Harris
When the waves are confined to a circular corral, they reflect back on themselves, producing complex patterns (grey ripples) that steer the droplet in an apparently random trajectory (white line). But in fact, the droplet’s motion follows statistical patterns determined by the wavelength of the waves.
In the early days of quantum physics, in an attempt to explain the wavelike behavior of quantum particles, the French physicist Louis de Broglie proposed what he called a “pilot wave” theory. According to de Broglie, moving particles — such as electrons, or the photons in a beam of light — are borne along on waves of some type, like driftwood on a tide.
Physicists’ inability to detect de Broglie’s posited waves led them, for the most part, to abandon pilot-wave theory. Recently, however, a real pilot-wave system has been discovered, in which a drop of fluid bounces across a vibrating fluid bath, propelled by waves produced by its own collisions.
In 2006, Yves Couder and Emmanuel Fort, physicists at Université Paris Diderot, used this system to reproduce one of the most famous experiments in quantum physics: the so-called “double-slit” experiment, in which particles are fired at a screen through a barrier with two holes in it.
In the latest issue of the journal Physical Review E (PRE), a team of MIT researchers, in collaboration with Couder and his colleagues, report that they have produced the fluidic analogue of another classic quantum experiment, in which electrons are confined to a circular “corral” by a ring of ions. In the new experiments, bouncing drops of fluid mimicked the electrons’ statistical behavior with remarkable accuracy.
“This hydrodynamic system is subtle, and extraordinarily rich in terms of mathematical modeling,” says John Bush, a professor of applied mathematics at MIT and corresponding author on the new paper. “It’s the first pilot-wave system discovered and gives insight into how rational quantum dynamics might work, were such a thing to exist.”
Joining Bush on the PRE paper are lead author Daniel Harris, a graduate student in mathematics at MIT; Couder and Fort; and Julien Moukhtar, also of Université Paris Diderot. In a separate pair of papers, appearing this month in the Journal of Fluid Mechanics, Bush and Jan Molacek, another MIT graduate student in mathematics, explain the fluid mechanics that underlie the system’s behavior.
Interference inference
The double-slit experiment is seminal because it offers the clearest demonstration of wave-particle duality: As the theoretical physicist Richard Feynman once put it, “Any other situation in quantum mechanics, it turns out, can always be explained by saying, ‘You remember the case of the experiment with the two holes? It’s the same thing.’”If a wave traveling on the surface of water strikes a barrier with two slits in it, two waves will emerge on the other side. Where the crests of those waves intersect, they form a larger wave; where a crest intersects with a trough, the fluid is still. A bank of pressure sensors struck by the waves would register an “interference pattern” — a series of alternating light and dark bands indicating where the waves reinforced or canceled each other.
Photons fired through a screen with two holes in it produce a similar interference pattern — even when they’re fired one at a time. That’s wave-particle duality: the mathematics of wave mechanics explains the statistical behavior of moving particles.
In the experiments reported in PRE, the researchers mounted a shallow tray with a circular depression in it on a vibrating stand. They filled the tray with a silicone oil and began vibrating it at a rate just below that required to produce surface waves.
They then dropped a single droplet of the same oil into the bath. The droplet bounced up and down, producing waves that pushed it along the surface.
The waves generated by the bouncing droplet reflected off the corral walls, confining the droplet within the circle and interfering with each other to create complicated patterns. As the droplet bounced off the waves, its motion appeared to be entirely random, but over time, it proved to favor certain regions of the bath over others.
It was found most frequently near the center of the circle, then, with slowly diminishing frequency, in concentric rings whose distance from each other was determined by the wavelength of the pilot wave.
The statistical description of the droplet’s location is analogous to that of an electron confined to a circular quantum corral and has a similar, wavelike form.
“It’s a great result,” says Paul Milewski, a math professor at the University of Bath, in England, who specializes in fluid mechanics. “Given the number of quantum-mechanical analogues of this mechanical system already shown, it’s not an enormous surprise that the corral experiment also behaves like quantum mechanics. But they’ve done an amazingly careful job, because it takes very accurate measurements over a very long time of this droplet bouncing to get this probability distribution.”
“If you have a system that is deterministic and is what we call in the business ‘chaotic,’ or sensitive to initial conditions, sensitive to perturbations, then it can behave probabilistically,” Milewski continues. “Experiments like this weren’t available to the giants of quantum mechanics. They also didn’t know anything about chaos.
Suppose these guys — who were puzzled by why the world behaves in this strange probabilistic way — actually had access to experiments like this and had the knowledge of chaos, would they have come up with an equivalent, deterministic theory of quantum mechanics, which is not the current one? That’s what I find exciting from the quantum perspective.”