As energy goes in California, schools are among the biggest users, causing many districts in the state to consider solar power as a way to shave utility expenses.

According to a fall report by Environment California Research and Policy Center, the state’s K-12 schools spend an estimated $132 per student each year on electricity. When totaled across the entire school system — the largest in the country—the energy expenses amount to $700 million.

One of the first to make the investment is the Golden Valley Unified School District, which serves approximately 2,000 students in Madera.

Totaling around 1.12 megawatts, the systems will produce approximately 1,700 megawatt-hours of electricity annually through ground-mounted solar panels ranging from 31 kilowatts to 550 kilowatts as well as solar parking structures at the district’s main office and Webster Elementary.

The $5.1 million project, funded in part by a $3 million low-interest loan and a school district bond, will be offset by net energy savings projected at more than $250,000 by 2017 and potentially up to $9 million over the 25-year lives of the systems.

As well, rebates of $973,531 for five years from Pacific Gas & Electric Co. will allow the district to pay for the solar panels without impacting its general fund.

Another small school district, the Firebaugh-Las Deltas Unified School District, which has some 2,300 students, will realize savings of $9 million over the next 25 years through solar panels at three of its five schools.

Installed by SolarCity of San Mateo, Calif., the systems cost the district about $5 million but Superintendent Russell Freitas said he looks to have it paid off in 15 years thanks to electricity savings while fulfilling some other hard-fought goals.

“During these past ten years, school districts have experienced the most difficult financial times, and because of the savings this solar project has created, we are able to bring music instruction back to the district,” said Freitas, referring to budget cuts beginning in 2009 that led the district to eliminate music instruction for grades six through 12.

The district, which enrolls around 20,000 students, will be able to save $44 million over the next 25 years thanks to solar panels set up as ground-mounted and elevated sun-tracking systems at six schools.

At a cost of $23 million, the district’s facilities director Owen Fish said the project was well worth the price, covered in full through $25 million in construction bonds approved in 2009.

“We had already started design on a 400-kilowatt system at the adult school and these bonds became available and we transferred to a much larger project,” Fish said. “When we looked at payback 10 years out, it seemed a reasonable payback for solar.”

SunPower also worked with Porterville Unified this summer when it introduced 16 students to hands-on instruction in solar technology during its weeklong career pathway program, the SunPower Solar Academy.

Since its founding in 1985, SunPower has installed 45 megawatts of solar power systems at more than 90 schools. In California alone, the company has installed systems for 10 school districts.

IES (Indoor Environmental Services) of Sacramento is currently in the process of building a $13.5-million solar energy project encompassing eight of the 11 campuses in the Selma Unified School District.

With nearly 6,500 students, the district expects to reap $34 million in gross savings over the next 25 years in addition to receiving a $1.4 million rebate from Pacific Gas & Electric Co. and a $125,000 state rebate.

The Clovis Unified School District is looking ahead to a $24-million solar energy project using money from its nearly $300-million Measure A bond passed by voters in June.

Installed as parking structures and a few on play areas built at around 18 of the district’s 47 campuses, the 5.4-megawatt project would take around a year and a half to build.

“Our current energy bill is $7.5 million and we estimated this 5-megawatt system would save about $2 million a year,” said Don Ulrich, assistant superintendent of facility services with Clovis Unified.

Around 90 California school systems, including some colleges, have installed solar panels as a way to save money on energy costs.

According to the California Solar Initiative, a state program that offers rebates to those who install solar power systems, California schools with on-site solar systems are expected to save up to $1.5 billion over the next 30 years, equivalent to 667 new school buses or 46,296 new laptops purchased every year. 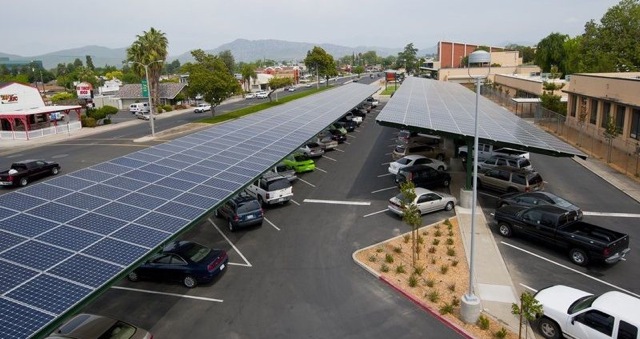