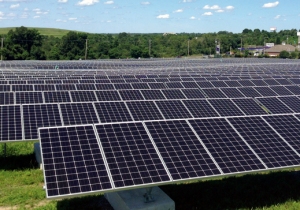 A growing number of companies are now selling large-scale battery storage together with solar installations to lower costs and to address challenges introduced by the intermittent nature of solar power, which is produced only when the sun is shining.

Last week the U.S. solar giant SunEdison announced that it had acquired Solar Grid Storage, a startup that integrates solar installations with battery storage. And SolarCity, the largest solar power installer in the U.S., is almost done installing 430 combined solar and storage systems in a pilot program in the San Francisco Bay area; the company plans to roll out the technology more widely this summer.+

The U.S. Department of Energy, meanwhile, is gathering proposals for $15 million worth of research projects aimed at finding more effective ways to combine photovoltaic and storage technology. One goal is to lower the cost of storing solar power to no more than the projected average U.S. grid price for residential power in 2020: 14 cents per kilowatt-hour. Solar storage currently costs about 20 cents to $1 per kilowatt-hour.+

As more solar power is installed, intermittency will become more of a problem. At the same time, though, the grid storage that could help compensate for this problem is becoming cheaper, and new converter technology can be used for both.+

At the height of a sunny day, for example, the converter is primarily producing AC power from the host’s solar panels. At all other times, however, it feeds spare capacity to the battery to serve the regional utility.+

The solar tax break for the combined system is slated to drop from 30 percent of the equipment cost to 10 percent in 2017, but Leyden says the dual-use converters should also come down in price as more are produced.+