“Using electrons like photons could provide the basis for a new electronic device that could carry current with virtually no resistance, even at room temperature.”

A new way to grow narrow ribbons of graphene, a lightweight and strong structure of single-atom-thick carbon atoms linked into hexagons, may address a shortcoming that has prevented the material from achieving its full potential in electronic applications.

Graphene nanoribbons, mere billionths of a meter wide, exhibit different electronic properties than two-dimensional sheets of the material.   “Confinement changes graphene’s behavior,” said An-Ping Li, a physicist at the Department of Energy’s Oak Ridge National Laboratory. Graphene in sheets is an excellent electrical conductor, but narrowing graphene can turn the material into a semiconductor if the ribbons are made with a specific edge shape.

At selected sites, this new technique can create interfaces between materials with different electronic properties. Such interfaces are the basis of semiconductor electronic devices from integrated circuits and transistors to light-emitting diodes and solar cells.   “Graphene is wonderful, but it has limits,” said Li.

“In wide sheets, it doesn’t have an energy gap–an energy range in a solid where no electronic states can exist. That means you cannot turn it on or off.”   When a voltage is applied to a sheet of graphene in a device, electrons flow freely as they do in metals, severely limiting graphene’s application in digital electronics. 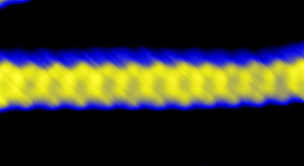 “When graphene becomes very narrow, it creates an energy gap,” Li said. “The narrower the ribbon is, the wider is the energy gap.”   In very narrow graphene nanoribbons, with a width of a nanometer or even less, how structures terminate at the edge of the ribbon is important too. For example, cutting graphene along the side of a hexagon creates an edge that resembles an armchair; this material can act like a semiconductor. Excising triangles from graphene creates a zigzag edge–and a material with metallic behavior.

To grow graphene nanoribbons with controlled width and edge structure from polymer precursors, previous researchers had used a metal substrate to catalyze a chemical reaction. However, the metal substrate suppresses useful edge states and shrinks the desired band gap.   Li and colleagues set out to get rid of this troublesome metal substrate. At the Center for Nanophase Materials Sciences, a DOE Office of Science User Facility at ORNL, they used the tip of a scanning tunneling microscope to inject either negative charge carriers (electrons) or positive charge carriers (“holes”) to try to trigger the key chemical reaction. They discovered that only holes triggered it. They were subsequently able to make a ribbon that was only seven carbon atoms wide–less than one nanometer wide–with edges in the armchair conformation.

“We figured out the fundamental mechanism, that is, how charge injection can lower the reaction barrier to promote this chemical reaction,” Li said. Moving the tip along the polymer chain, the researchers could select where they triggered this reaction and convert one hexagon of the graphene lattice at a time.   Next, the researchers will make heterojunctions with different precursor molecules and explore functionalities. They are also eager to see how long electrons can travel in these ribbons before scattering, and will compare it with a graphene nanoribbon made another way and known to conduct electrons extremely well.

Using electrons like photons could provide the basis for a new electronic device that could carry current with virtually no resistance, even at room temperature.

“It’s a way to tailor physical properties for energy applications,” Li said. “This is an excellent example of direct writing. You can direct the transformation process at the molecular or atomic level.” Plus, the process could be scaled up and automated. 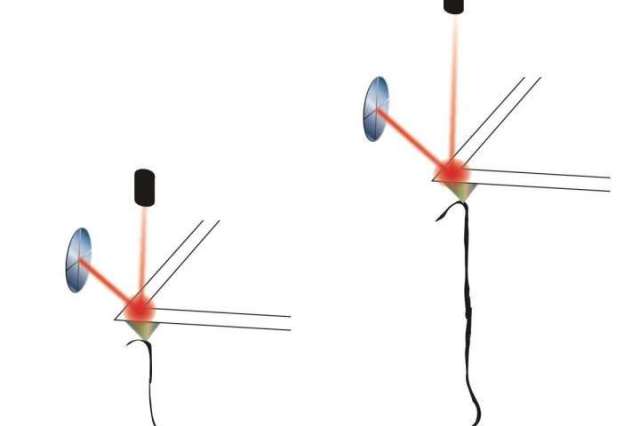 The tip of an atomic force microscope on a cantilevered arm is used to pull a graphene nanoribbon the same way it would be used to pull apart a protein or a strand of DNA in a Rice University lab. The microscope can be used to measure properties like rigidity in a material as it’s manipulated by the tip. Credit: Kiang Research Group/Rice University

Graphene nanoribbons (GNRs) bend and twist easily in solution, making them adaptable for biological uses like DNA analysis, drug delivery and biomimetic applications, according to scientists at Rice University.

Knowing the details of how GNRs behave in a solution will help make them suitable for wide use in biomimetics, according to Rice physicist Ching-Hwa Kiang, whose lab employed its unique capabilities to probe nanoscale materials like cells and proteins in wet environments. Biomimetic materials are those that imitate the forms and properties of natural materials.

Graphene nanoribbons can be thousands of times longer than they are wide. They can be produced in bulk by chemically “unzipping” carbon nanotubes, a process invented by Rice chemist and co-author James Tour and his lab.

Their size means they can operate on the scale of biological components like proteins and DNA, Kiang said. “We study the mechanical properties of all different kinds of materials, from proteins to cells, but a little different from the way other people do,” she said. “We like to see how materials behave in solution, because that’s where biological things are.” Kiang is a pioneer in developing methods to probe the energy states of proteins as they fold and unfold.

She said Tour suggested her lab have a look at the mechanical properties of GNRs. “It’s a little extra work to study these things in solution rather than dry, but that’s our specialty,” she said.

Nanoribbons are known for adding strength but not weight to solid-state composites, like bicycle frames and tennis rackets, and forming an electrically active matrix. A recent Rice project infused them into an efficient de-icer coating for aircraft.

But in a squishier environment, their ability to conform to surfaces, carry current and strengthen composites could also be valuable.

“It turns out that graphene behaves reasonably well, somewhat similar to other biological materials. But the interesting part is that it behaves differently in a solution than it does in air,” she said. The researchers found that like DNA and proteins, nanoribbons in solution naturally form folds and loops, but can also form helicoids, wrinkles and spirals.

Kiang, Wijeratne and Jingqiang Li, a co-author and student in the Kiang lab, used atomic force microscopy to test their properties. Atomic force microscopy can not only gather high-resolution images but also take sensitive force measurements of nanomaterials by pulling on them. The researchers probed GNRs and their precursors, graphene oxide nanoribbons.

The researchers discovered that all nanoribbons become rigid under stress, but their rigidity increases as oxide molecules are removed to turn graphene oxide nanoribbons into GNRs. They suggested this ability to tune their rigidity should help with the design and fabrication of GNR-biomimetic interfaces.

“Graphene and graphene oxide materials can be functionalized (or modified) to integrate with various biological systems, such as DNA, protein and even cells,” Kiang said. “These have been realized in biological devices, biomolecule detection and molecular medicine. The sensitivity of graphene bio-devices can be improved by using narrow graphene materials like nanoribbons.”

Wijeratne noted graphene nanoribbons are already being tested for use in DNA sequencing, in which strands of DNA are pulled through a nanopore in an electrified material. The base components of DNA affect the electric field, which can be read to identify the bases.

The researchers saw nanoribbons’ biocompatibility as potentially useful for sensors that could travel through the body and report on what they find, not unlike the Tour lab’s nanoreporters that retrieve information from oil wells.

Further studies will focus on the effect of the nanoribbons’ width, which range from 10 to 100 nanometers, on their properties.

Rice University scientists have modified their graphene-based de-icer to resist the formation of ice well below the freezing point and added superhydrophobic capabilities. The robust film is intended for use in extreme environments as well …more

Rice University scientists have modified their graphene-based de-icer to resist the formation of ice well below the freezing point and added superhydrophobic capabilities. The robust film is intended for use in extreme environments as well …more
Rice University scientists have advanced their graphene-based de-icer to serve a dual purpose. The new material still melts ice from wings and wires when conditions get too cold. But if the air is above 7 degrees Fahrenheit, ice won’t form at all.

The Rice lab of chemist James Tour gave its de-icer superhydrophobic (water-repelling) capabilities that passively prevent water from freezing above 7 degrees. The tough film that forms when the de-icer is sprayed on a surface is made of atom-thin graphene nanoribbons that are conductive, so the material can also be heated with electricity to melt ice and snow in colder conditions.
The material can be spray-coated, making it suitable for large applications like aircraft, power lines, radar domes and ships, according to the researchers. The study was published this month in the American Chemical Society journal ACS Applied Materials and Interfaces.

“We’ve learned to make an ice-resistant material for milder conditions in which heating isn’t even necessary, but having the option is useful,” Tour said. “What we now have is a very thin, robust coating that can keep large areas free of ice and snow in a wide range of conditions.”
Tour, lead authors Tuo Wang, a Rice graduate student, and Yonghao Zheng, a Rice postdoctoral researcher, and their colleagues tested the film on glass and plastic.
Rice de-icer gains anti-icing properties.

Test samples show a graphene nanoribbon-based film developed at Rice University with both passive and active de-icing properties. When the film at left is heated without an application of lubricants, ice melts but water droplets remain on …more
Materials are superhydrophobic if they have a water-contact angle larger than 150 degrees.

The term refers to the angle at which the surface of the water meets the surface of the material. The greater the beading, the higher the angle. An angle of 0 degrees is basically a puddle, while a maximum angle of 180 degrees defines a sphere just touching the surface.
The Rice films use graphene nanoribbons modified with a fluorine compound to enhance their hydrophobicity. They found that nanoribbons modified with longer perfluorinated chains resulted in films with a higher contact angle, suggesting that the films are tunable for particular conditions, Tour said. Warming test surfaces to room temperature and cooling again had no effect on the film’s properties, he said.

The researchers discovered that below 7 degrees, water would condense within the structure’s pores, causing the surface to lose both its superhydrophobic and ice-phobic properties. At that point, applying at least 12 volts of electricity warmed them enough to retain its repellant properties.

Applying 40 volts to the film brought it to room temperature, even if the ambient temperature was 25 degrees below zero. Ice allowed to form at that temperature melted after 90 seconds of resistive heating.

The researchers found that while effective, the de-icing mode did not remove water completely, as some remained trapped in the pores between linked nanoribbon bundles. Adding a lubricant with a low melting point (minus 61 degrees F) to the film made the surface slippery, sped de-icing and saved energy. 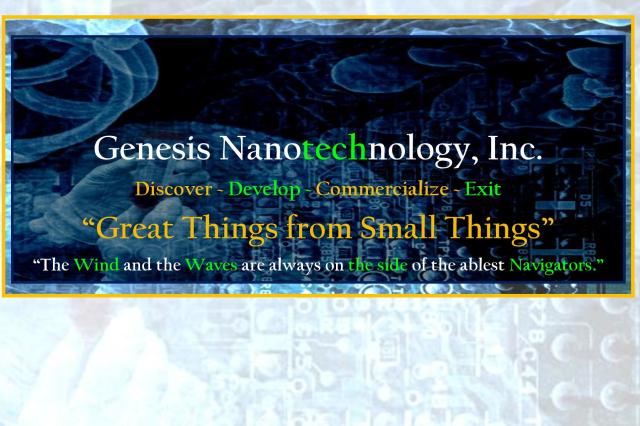