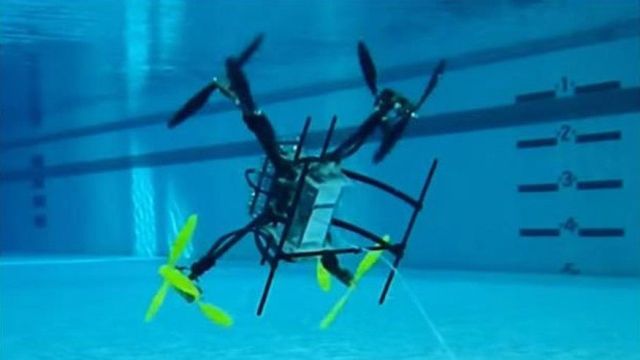 A propeller-driven drone that can fly both in the air and underwater is in development at Rutgers University— a unique vehicle that caught the eye of the U.S. Navy and could be used in search-and-rescue operations and underwater inspections.

The amphibious drone can emerge from the water and then fly through the air, and vice versa, meaning that operators could dispatch it from dry land, send it into water to take a look around, and then bring it back.

F. Javier Diaz, a Rutgers University professor in the department of mechanical and aerospace engineering, explained that the breakthrough in the project’s development came when they decided to give the drone two sets of propellers, one above the other. That helps with the tricky transition from the water to air and back again. While one set of propellers struggles at the air-surface interface, the other set, either all the way in the air or water, works more effectively.

“I think what really impresses people, is how easily it gets out of the water,” Diaz told FoxNews.com. “That’s really where the magic occurs.”

The concept behind the drone is that it could, for example, be launched from shore to inspect underwater portions of a bridge, an oil platform, or a car sunk in a lake or river. This concept promises to be faster that the traditional method of sending a diver out to do an inspection, Diaz said.

The device garnered the interest of the Office of Naval Research, which grantedthe project over half a million dollars last year. “I came to them, showed them the video,” Diaz recounted. “And they were like, ‘We’ve only seen this in movies. We want it.’”

Currently, the drone needs a communications tether, because of the difficulties of talking with the drone underwater— an especially difficult task in a pool, where the walls cause signals to bounce.