(Nanowerk News) For the first time, a team of  researchers at the Helmholtz Zentrum Berlin (HZB) led by Dr. Roland Mainz and  Dr. Christian Kaufmann has managed to observe growth of high-efficiency  chalcopyrite thin film solar cells in real time and to study the formation and  degradation of defects that compromise efficiency. To this end, the scientists  set up a novel measuring chamber at the Berlin electron storage ring BESSY II,  which allows them to combine several different kinds of measuring techniques.  Their results show during which process stages the growth can be accelerated and  when additional time is required to reduce defects. Their work has now been  published online in Advanced Energy Materials (“Formation of CuInSe2 and  CuGaSe2 Thin-Films Deposited by Three-Stage  Thermal Co-Evaporation: A Real-Time X-Ray Diffraction and Fluorescence  Study”).

Today’s chalcopyrite thin film cells based on copper indium  gallium selenide are already reaching efficiencies of more than 20 percent. For  the fabrication of the extremely thin polycrystalline layers, the process of  coevaporation has lead to the best results so far: During coevaporation, two  separate elements are evaporated simultaneously, first indium (or gallium) and  selenium, then copper and selenium, and, finally, indium (or gallium) and  selenium again. This way, a thin film of crystals forms, which exhibit only a  small number of defects. “Until recently, we did not fully understand what  exactly happens during this coevaporation process,” says Dr. Roland Mainz of the  HZB’s Institute of Technology. The team of physicists worked for three years  using on-site and real-time measurements to find an answer to this question. 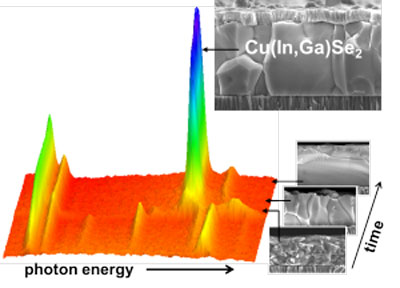 For these measurements they constructed a new kind of  experimental chamber, which allows for an analysis of polycrystalline  chalcopyrite film formation during coevaporation when exposed to synchrotron  light at BESSY II. In addition to the evaporation sources for the elements, this  vacuum chamber contains heating and cooling elements to control the evaporative  process. According to Mainz, “one of the main challenges was adjusting the  chamber, which weighs around 250 kilograms, with an accuracy of 10 micrometer.”  Because of thermal expansion during evaporation, the height has to be  automatically re-adjusted every few seconds.

With this setup, for the first time worldwide they were able to  observe polycrystalline film growth using in situ X-ray diffraction and  fluorescence analysis during coevaporation in real time. “We are now able to see  how crystalline phases form and transform and when defects form during the  different stages of evaporation. “But we’re also able to tell when these defects  disappear again.” This takes place in the second process stage, when copper and  selenium are evaporated. Excess copper, which deposits at the surface in the  form of copper selenide helps to remove defects. “This was already known before  from previous experiments. But now, using fluorescence signals and numeric model  calculations, we are able to show how copper selenide penetrates the copper  indium selenide layer,” Mainz explains. Here clear-cut differences between  copper indium selenide and copper gallium selenide layers became apparent: While  copper is able to penetrate the copper-indium-selenide layer, in the case of  copper-gallium-selenide, which is otherwise pretty similar, it remains at the  surface. This could be one possible reason for why the use of pure copper  gallium selenide does not yield high efficiency solar cells.