For all the promise and peril of artificial intelligence, there’s one big obstacle to its seemingly relentless march:

The algorithms for running AI applications have been so big and complex that they’ve required processing on powerful machines in the cloud and data centers, making a wide swath of applications less useful on smartphones and other “edge” devices.

Now, that concern is quickly melting away, thanks to a series of breakthroughs in recent months in software, hardware and energy technologies. That’s likely to drive AI-driven products and services even further away from a dependence on powerful cloud-computing services and enable them to move into every part of our lives — even inside our bodies. 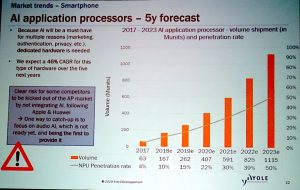 Market researcher Yole Développement forecasts that AI application processors will enjoy a 46% compound annual growth rate through 2023, when nearly all smartphones will have them, from fewer than 20% today.

And it’s not just startups. Just today, Intel Corp. previewed its coming Ice Lake chips, which among other things has “Deep Learning Boost” software and other new AI instructions on graphics processing unit.

“Within the next two years, virtually every processor vendor will be offering some kind of competitive platform for AI,” Tom Hackett, principal analyst at IHS Markit, said at the alliance’s Embedded Vision Summit. “We are now seeing a next-generation opportunity.” 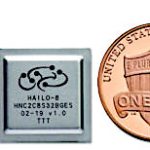 Those chips are finding their way into many more devices beyond smartphones. They’re also being used in millions of “internet of things” devices such as robots, drones, cars, cameras and wearables.

Among the 75 or so companies developing machine learning chips, for instance, is Israel’s Hailo, which raised a $21 million funding round in January. In mid-May it released a processor that’s tuned for deep learning, a branch of machine learning responsible for recent breakthroughs in voice and image recognition.

More compact and capable software is paving the way for AI at the edge as well. Google LLC, for instance debuted its TensorFlow Litemachine learning library for mobile devices in late 2017, enabling the potential for smart cameras to can identify wildlife or imaging devices to can make medical diagnoses even where there’s no internet connection.

Some 2 billion mobiles now have TensorFlow Lite deployed on them, Google staff research engineer Pete Warden said at a keynote presentation at the Embedded Vision Summit.

And in March, Google rolled out an on-device speech recognizer to power speech input in Gboard, Google’s virtual keyboard app. The automatic speech recognition transcription algorithm is now down to 80 megabytes so it can run on the Arm Ltd. A-series chip inside a typical Pixel phone, and that means it works offline so there’s no network latency or spottiness.

“Virtually all the machine learning processing will be done on the device,” said Bier, who’s also co-founder and president of Berkeley Design Technology Inc., which provides analysis and engineering services for embedded digital signal processing technology. And there will be a whole lot of devices: Warden cited an estimate of 250 billion active embedded devices in the world today, and that number is growing 20% a year. 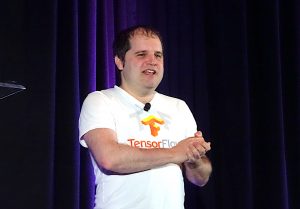 But doing AI on such devices is no easy task. It’s more than just the size of the machine learning algorithms but the power it takes to execute them, especially since smartphones and especially IoT devices such as cameras and various sensors can’t depend on power from a wall socket or even batteries. “The devices will not scale if we become bound to changing or recharging batteries,” said Warden.

The radio connections needed to send data to and from the cloud also are energy hogs, so communicating via cellular or other connections is a deal breaker for many small, cheap devices. The result, said Yohann Tschudi, technology and market analyst at Yole Développement: “We need a dedicated architecture for what we want to do.”

There’s also a need to develop devices that realistically must draw less than a milliwatt, and that’s about a thousandth of what a smartphone uses. The good news is that an increasing array of sensors and even microprocessors promises to do just that.

The U.S. Department of Energy, for instance, has helped develop low-cost wireless peel-and-stick sensors for building energy management in partnership with Molex Inc. and building automation firm SkyCentrics Inc. And experimental new image sensors can power themselves with ambient light.

And even microprocessors, the workhorses for computing, can be very low-power, such as those from startups such as Ambiq Micro, Eta Compute, Syntiant Corp., Applied Brain Research, Silicon Laboratories Inc. and GreenWaves Technologies.

“There’s no theoretical reason we can’t compute in microwatts,” or a thousand times smaller than milliwatts, Warden said. That’s partly because they can be programmed, for instance, to wake up a radio to talk to the cloud only when something actionable happens, like liquid spilling on a floor. 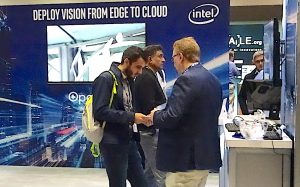 Warden even anticipates that sensors could talk to each other, such as in a smart home where the smoke alarm detects a potential fire and the toaster replies that no, it’s just burned toast. That’s speculative for now, but Google’s already working on “federated learning” to train machine learning models without using centralized training data (below).

None of this means the cloud won’t continue to have a huge role in machine learning. All those examples involve running the models on devices, a process known as inference.

The training of the models, on the other hand, still involves processing massive amounts of data on powerful clusters of computers.

But it’s now apparent that the future of AI lies less in the cloud than at the edge.