In a study published in Nature, Monica Driscoll, distinguished professor of molecular biology and biochemistry, School of Arts and Sciences, and her team, found that while healthy neurons should be able to sort out and and rid brain cells of toxic proteins and damaged cell structures without causing problems, laboratory findings indicate that it does not always occur. 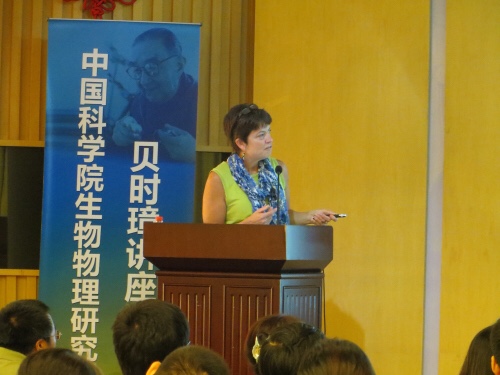 These findings, Driscoll said, could have major implications for neurological disease in humans and possibly be the way that disease can spread in the brain.

“Normally the process of throwing out this trash would be a good thing,” said Driscoll. “But we think with neurodegenerative diseases like Alzheimer’s and Parkinson’s there might be a mismanagement of this very important process that is supposed to protect neurons but, instead, is doing harm to neighbor cells.”

Driscoll said scientists have understood how the process of eliminating toxic cellular substances works internally within the cell, comparing it to a garbage disposal getting rid of waste, but they did not know how cells released the garbage externally.

“What we found out could be compared to a person collecting trash and putting it outside for garbage day,” said Driscoll. “They actively select and sort the trash from the good stuff, but if it’s not picked up, the garbage can cause real problems.”

Working with the transparent roundworm, known as the C. elegans, which are similar in molecular form, function and genetics to those of humans, Driscoll and her team discovered that the worms — which have a lifespan of about three weeks — had an external garbage removal mechanism and were disposing these toxic proteins outside the cell as well.

Ilija Melentijevic, a graduate student in Driscoll’s laboratory and the lead author of the study, realized what was occurring when he observed a small cloud-like, bright blob forming outside of the cell in some of the worms. Over two years, he counted and monitored their production and degradation in single still images until finally he caught one in mid-formation.

“They were very dynamic,” said Melentijevic, an undergraduate student at the time who spent three nights in the lab taking photos of the process viewed through a microscope every 15 minutes. “You couldn’t see them often, and when they did occur, they were gone the next day.”

Research using roundworms has provided scientists with important information on aging, which would be difficult to conduct in people and other organisms that have long life spans.

In the newly published study, the Rutgers team found that roundworms engineered to produce human disease proteins associated with Huntington’s disease and Alzheimer’s, threw out more trash consisting of these neurodegenerative toxic materials.

While neighboring cells degraded some of the material, more distant cells scavenged other portions of the diseased proteins.

“These finding are significant,” said Driscoll. The work in the little worm may open the door to much needed approaches to addressing neurodegeneration and diseases like Alzheimer’s and Parkinson’s.”

Materials provided by Rutgers University. Original written by Robin Lally. Note: Content may be edited for style and length.