Microelectronic devices – from pacemakers to cellphones – have long shaped the course of human health and telecommunications. But, scientists have struggled to navigate the technology gap between microelectronics and the biological world.

For example, today’s consumers cannot tap into their smartphones to uncover information about an infection or illness affecting their body, nor can they use their phones to signal a device to administer an antibiotic or drug.

One of the primary reasons for this disconnect between the body and everyday technology is that microelectronic devices process information using materials such as silicon, gold, or chemicals, and an energy source that provides electrons; but, free electrons do not exist in biology. As such, scientists encounter a major roadblock in their efforts to bridge the gap between biological systems and microelectronics.

But, engineers at the University of Maryland’s A. James Clark School of Engineering, along with researchers from the University of Nebraska-Lincoln and the U.S. Army Research Laboratory, may have found a loophole. 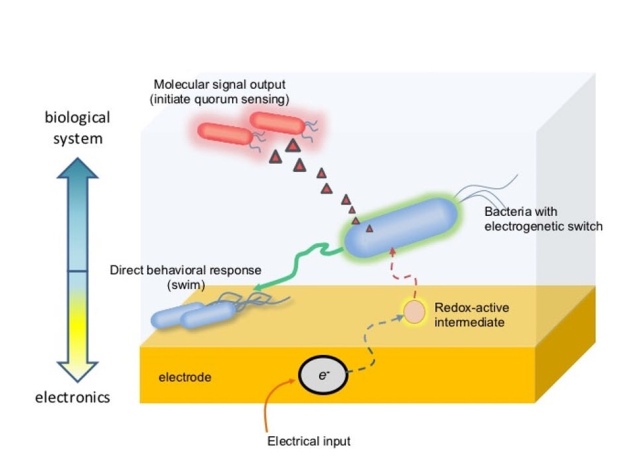 “Devices that freely exchange information between the electronic and biological worlds would represent a completely new societal paradigm,” said bioengineering professor William E. Bentley, director of the UMD Robert E. Fischell Institute for Biomedical Devices. “It has only been about 60 years since the implantable pacemaker and defibrillator proved what devices could achieve by electronically stimulating ion currents. Imagine what we could do by transferring all the knowledge contained in our molecular space, by tapping into and controlling molecules such as glucose, hormones, DNA, proteins, or polysaccharides in addition to ions.”

Building on their progress, the research team is now working to develop a novel biological memory device that can be written to and read from via either biological and/or electronic means. Such a device would function like a thumb drive or SD card, using molecular signals to store key information, and would require almost no energy. Inside the body, these devices would serve the same purpose – except, instead of merely storing data, they could be used to control biological behaviors.

“For years, microelectronic circuits have had limited capabilities in maximizing their computing and storage capacities, mainly due to the physical constraints that the building-block inorganic materials – such as silicon – imposed upon them,” said UMD professor Reza Ghodssi, who specializes in electrical and computer engineering. “By exploring and utilizing the world of biology through an integrated and robust interface technology with semiconductor processing, we expect to address those limitations by allowing our researchers and students to design and develop first-of-kind innovative and powerful bioelectronic devices and systems.”

The collaborative research team will work to integrate subsystems and create biohybrid circuits to develop an electronically controlled device for the body that interprets molecular information, computes desired outcomes, and electronically actuates cells to signal and control biological populations.

The hope is that such a system could seek out and destroy a bacterial pathogen by recognizing its secreted signaling molecules and synthesizing a pathogen-specific toxin. In this way, the group will, for the first time, explore electronic control of complex biological behaviors.

This year, the group was awarded a $1.5 million National Science Foundation grant through the Semiconductor Synthetic Biology for Information Processing and Storage technologies (SemiSynBio) program. Their earlier related work was published in Nature Communications.