Nanoscientists have developed a technique that allows them to transform stem cells into bone cells on command. But could the process be used to treat deadly conditions such as heart disease and Parkinson’s?

Anyone who knows a thing or two about biology knows that stem cells have tremendous potential in medicine: anything from repairing and replenishing heart cells after an attack to replacing nerve cells that are progressively lost in the brain of a person with Parkinson’s.

One of the big challenges of using stem cells as a therapy is coaxing them to grow into the specific type of tissue that is required. In the body this happens thanks to precise chemical and physical signals, not all of which are yet understood or characterised.

Using chemicals to direct the fate of stem cells has worked in laboratories, but the outcomes are not always safe or predictable. 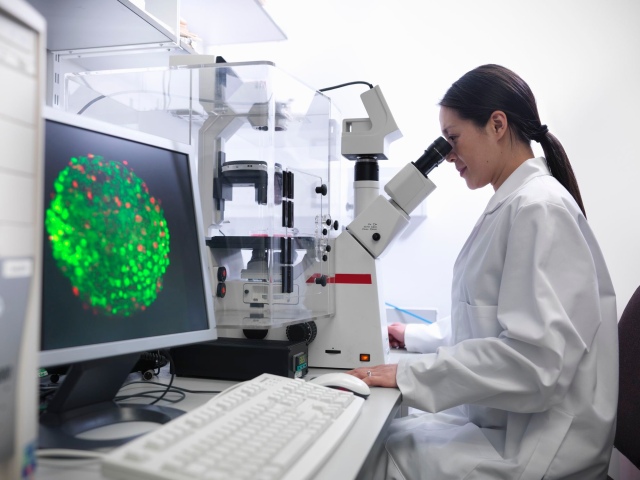 Now, a team from Northwestern University in the US thinks it has a solution. They say that they can direct the developmental fate of stem cells using only physical cues, by adapting a well-known technique that traces three-dimensional microscopic shapes and reconstructs them on flat surfaces.

By placing the stem cells on the nanopatterned surface, and without adding any kind of chemicals, the scientists found that they could induce the stem cells to develop into bone cells.

Extend this technique, they say, and it might be possible to turn stem cells into any type of cell on command.

When the body needs a repair to be carried out, a special type of stem cell – called mesenchymal stem cells or MSCs – can enter the blood circulation system. These cells travel around the body and actually home in on where they are needed.

MSCs have the potential to develop into a whole range of different tissue types – in other words, they are pluripotent.

The developmental decision that they make depends, in part, on the molecular structures in the matrix surrounding the cells that make up the tissue.

The structure of the matrix affects the softness of the tissue – so the brain is a soft, mushy tissue, while stiffer tissues include muscle, and rigid tissues include bone.

The US team has mimicked this real-life situation. Using the molecular structures in the matrix that surround a cell as a pattern, and with an array of pyramid-like points that are a hundred-thousand times smaller than the tip of a pencil and incredibly sharp, molecule by molecule they have built up a kind of nano-landscape with sculptures ranging in size from the nano- to the microscale, on a small piece of glass. The technique is called polymer pen lithography.

The researchers grew MSCs on one type of nanoscopic sculpture, and were able to direct their developmental fate.

“Starting with millions of possibilities, we quickly zeroed in on the pattern of features that best directed the stem cells into osteocytes [bone cells],” says Chad A Mirkin, who led the work.

Mirkin is professor of chemistry in the Weinberg College of Arts and Sciences and is also the director of Northwestern’s International Institute for Nanotechnology.

The potential of this tool is to be able to take pluripotent stem cells from a patient, run them over a selected three-dimensional matrix in order to convert them rapidly into a particular cell type of choice, and then return them to the patient for repair and replenishment of damaged tissues.

“With further development, researchers might be able to use this approach to prepare cells of any lineage on command,” Mirkin says.

“The three-dimensional aspect is very interesting, and mimics aspects of the environment in a highly stylized way,” says Fiona Watt, professor and director of the Centre for Stem Cells and Regenerative Medicine at Kings College London.

“Several reports argue that the topology imposed on a stem cell – how a stem cell is contained in 3D – affects its behaviour. When you consider your bones and cartilage, this makes perfect sense,” Watt adds.

One important aspect of this work according to Marilyn Monk, emeritus professor of molecular embryology at University College London’s Institute of Child Health, is that it provides evidence that stem-cell fate can solely be informed by the local three-dimensional molecular structure.

“But that’s not to say that this is the only way to direct stem-cell fate,” Monk says. “We know that regulation of development involves multiple mechanisms that operate independently and inter-dependently to bring about a final specific cell function.”

Nonetheless he believes the technique is a real advance. “It would be neat to see if they can take a stem cell, already committed in one developmental direction, and back it up so that it might become another type of cell again, using only their patterning technique,” he says.

“That would be the Nobel prize.”