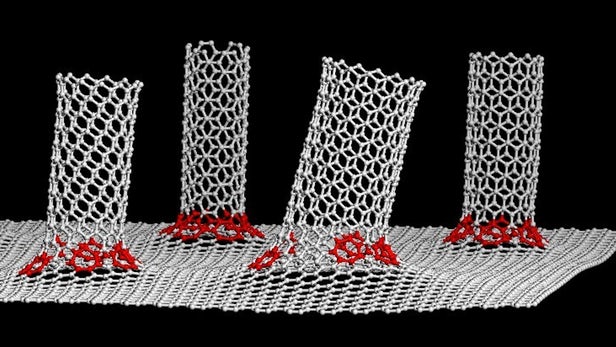 Could a new material involving a carbon nanotube and graphene hybrid put an end to the dendrite problem in lithium batteries? (Credit: Tour Group/Rice University)

The high energy capacity of lithium-ion batteries has led to them powering everything from tiny mobile devices to huge trucks. But current lithium-ion battery technology is nearing its limits and the search is on for a better lithium battery. But one thing stands in the way: dendrites. If a new technology by Rice University scientists lives up to its potential, it could solve this problem and enable lithium-metal batteries that can hold three times the energy of lithium-ion ones.

Dendrites are microscopic lithium fibers that form on the anodes during the charging process, spreading like a rash till they reach the other electrode and causing the battery to short circuit. As companies such as Samsung know only too well, this can cause the battery to catch fire or even explode.

“Lithium-ion batteries have changed the world, no doubt,” says chemist Dr. James Tour, who led the study. “But they’re about as good as they’re going to get. Your cellphone’s battery won’t last any longer until new technology comes along.”

So until scientists can figure out a way to solve the problem of dendrites, we’ll have to put our hopes for a higher capacity, faster-charging battery that can quell range anxiety on hold. This explains why there’s been no shortage of attempts to solve this problem, from using Kevlar to slow down dendrite growth to creating a new electrolyte that could lead to the development of an anode-free cell. So how does this new technology from Rice University compare?

For a start, it’s able to stop dendrite growth in its tracks. Key to it is a unique anode made from a material that was first created at the university five years ago. By using a covalent bond structure, it combines a two-dimensional graphene sheet and carbon nanotubes to form a seamless three-dimensional structure. As Tour explained back when the material was first unveiled:

“By growing graphene on metal (in this case copper) and then growing nanotubes from the graphene, the electrical contact between the nanotubes and the metal electrode is ohmic. That means electrons see no difference, because it’s all one seamless material.”

Envisioned for use in energy storage and electronics applications such as supercapacitors, it wasn’t until 2014, when co-lead author Abdul-Rahman Raji was experimenting with lithium metal and the graphene-nanotube hybrid, that the researchers discovered its potential as a dendrite inhibitor.

“I reasoned that lithium metal must have plated on the electrode while analyzing results of experiments carried out to store lithium ions in the anode material combined with a lithium cobalt oxide cathode in a full cell,” says Raji. “We were excited because the voltage profile of the full cell was very flat. At that moment, we knew we had found something special.”

Closer analysis revealed no dendrites had grown when the lithium metal was deposited into a standalone hybrid anode – but would it work in a proper battery?

To test the anode, the researchers built full battery prototypes with sulfur-based cathodes that retained 80 percent capacity after more than 500 charge-discharge cycles (i.e. the rough equivalent of what a cellphone goes through in a two-year period). No signs of dendrites were observed on the anodes.

The low density and high surface area of the nanotube forest allow the lithium metal to coat the carbon hybrid material evenly when the battery is charged. And since there is plenty of space for the particles to slip in and out during the charge and discharge cycle, they end up being evenly distributed and this stops the growth of dendrites altogether.

According to the study, the anode material is capable of a lithium storage capacity of 3,351 milliamp hours per gram, which is close to pure lithium’s theoretical maximum of 3,860 milliamp hours per gram, and 10 times that of lithium-ion batteries. And since the nanotube carpet has a low density, this means it’s able to coat all the way down to substrate and maximize use of the available volume.

“Many people doing battery research only make the anode, because to do the whole package is much harder,” says Tour. “We had to develop a commensurate cathode technology based upon sulfur to accommodate these ultrahigh-capacity lithium anodes in first-generation systems. We’re producing these full batteries, cathode plus anode, on a pilot scale, and they’re being tested.”

The study was published in ACS Nano.