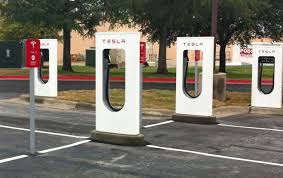 Tesla will double the number of its Superchargers and Destination Charging connectors in urban centers and on long distance routes in 2017. This is part of the company’s ongoing commitment to clean energy.

On the heels of announcements about a more affordable Model 3 and a Tesla pickup truck, Tesla has begun to prepare for the mass-market in earnest for the first time by making more charging stations for available for their vehicles. To that end, Tesla’s blog announced on Monday, April 24, that the company would be doubling the Tesla charging network in 2017. This includes expanding existing sites in city centers and along highways so drivers need never wait to charge before getting back on the road.

Since the charging network began in 2012, Tesla has constructed more than 5,400 Superchargers to make long distance travel possible and even convenient for Tesla owners. They’ve also built more than 9,000 Destination Charging connectors equipped with Wall Connectors at restaurants, hotels, and other locations.

By the end of 2017 Tesla plans to have more than 10,000 Superchargers and 15,000 Destination Chargers in place around the world. Superchargers will increase by 150 percent in North America, and 1,000 additional Superchargers will be built in California alone. Site selection is underway now so many will open before summer travel season begins. Tesla will place charging sites in urban centers for quicker charging. Larger sites, which will accommodate simultaneous charging for several dozen drivers, will be constructed along the most-used travel routes for Tesla drivers.

Tesla’s investment in infrastructure represents a vote of confidence in the success of its newest products as well as the potential for the auto industry to continue shifting toward electric vehicles. Tesla’s overall plan is to change the way we think about power and energy. Experts are already acknowledging that Tesla will be disrupting the auto industry, and the energy industry is next.

Tesla’s newest solar panels integrate seamlessly with the Tesla Powerwall battery system and will be available this summer. By 2018, the Tesla Gigafactory will reach full capacity; when it does, it will be producing more lithium ion batteries than the rest of the world combined. These tools will allow Tesla owners to power their homes — and their vehicles — with solar power, greatly reducing their carbon footprints.

With the ability to harness and store enough renewable energy, we could end our reliance on fossil fuels once and for all — and Musk thinks that’s something Earth urgently needs.