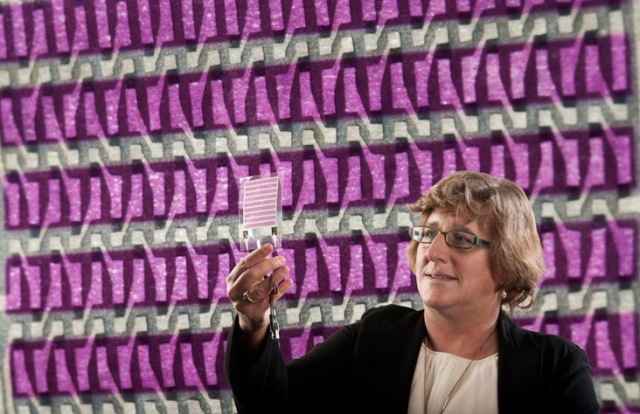 Chemical engineer Karen K. Gleason would like to paper the world with solar cells. Glued to laptops, tacked onto roof tiles, tucked into pockets, lining window shades, she envisions ultrathin, ultra-flexible solar cells going where no solar cells have gone before.

Silvery blue solar cells seem to magically generate electricity from sunlight the way Rumpelstiltskin spun straw into gold but in their present form, they’re more akin to gold than straw.

Karen Gleason develops a low-cost, environmentally friendly way to make solar cells on tracing paper, which one day might charge a cell phone.

The cost of manufacturing crystalline and thin-film solar cells with silicon, glass, and rare earth materials like tellurium and indium is high.

Gleason, the Alexander and I. Michael Kasser Professor of Chemical Engineering, has collaborated with Vladimir Bulovic, professor of electrical engineering; former chemical engineering graduate student Miles C. Barr; and others to come up with a low-cost, environmentally friendly way to make practically indestructible solar cells on ordinary tracing paper.

One day, a paper solar cell might help us charge a cell phone. “A paper substrate is a thousand times cheaper than silicon and glass. What’s more, these solar cells can be scrunched up, folded a thousand times, and weatherproofed,” she says.

Using abundant, inexpensive organic elements like carbon, oxygen, and copper­­ — “nothing exotic,” she says — in a vacuum chamber, layers are “printed” through a process called vapor deposition, similar to frost forming on a window. At less than 120 degrees Celsius, the method is gentler and cooler than that normally used to manufacture photovoltaic materials, allowing it to be used on delicate paper, cloth, or plastic. “We repeat that five times and you end up with a solar cell,” she says; tweaking the composition of the five layers of materials determines the cells’ energy output.

The research is funded by MITEI founding member Eni SpA, Italy’s biggest energy company, which is pursuing new advances in biofuels, solar, and other forms of alternative energy.

“The challenge of the project appealed to me,” she says. “I also thought it would be fun.” Her students display a prototype solar cell (a sheet of paper embossed with a pinstripe and chain-link design) folded into a paper airplane as a power source for an LCD clock.
Gleason would like to see the first commercial solar paper devices hit the market in five years, but first the cells’ efficiency has to be ramped up from nearly 4 percent to at least 10 percent. (Commercial solar cells have an efficiency of around 15 percent.) MIT engineers believe this is doable.

“The paper cells’ portability could have a big impact in developing countries, where the cost of transporting solar cells has been prohibitive.