Matteo Achilli (R) works with one of his assistants in his office in Formello, north of Rome July 25, 2013.

Could a robot do your job?

Millions of people who didn’t see automation coming will soon find out the painful way. The answer is a resounding yes.

The World Economic Forum’s Future of Jobs study predicts that 5 million jobs will be lost before 2020 as artificial intelligence, robotics, nanotechnology and other socio-economic factors replace the need for human workers.

The good news is that those same technological advances will also create 2.1 million new jobs. But the manual and clerical workers who find themselves out of work are unlikely to have the required skills to compete for the new roles. Most new jobs will be in more specialized areas such as computing, mathematics, architecture and engineering.

The Fourth Industrial Revolution – What Does It Mean – How to Respond – Will You Be Ready?

“Without urgent and targeted action today, to manage the near-term transition and build a workforce with future-proof skills, governments will have to cope with ever-growing unemployment and inequality, and businesses with a shrinking consumer base,” said Klaus Schwab, Founder and Executive Chairman of the World Economic Forum.

So what skills should workers be acquiring to make sure they have value as the Fourth Industrial Revolution gathers pace? Some may be surprised to learn that skills we develop in pre-school will be valued highly.

David Deming, associate professor of education and economics at Harvard University, argues that soft skills like sharing and negotiating will be crucial. He says the modern workplace, where people move between different roles and projects, closely resembles pre-school classrooms, where we learn social skills such as empathy and cooperation.

Deming has mapped the changing needs of employers and identified key skills that will be required to thrive in the job market of the near future. Along with those soft skills, mathematical ability will be enormously beneficial. 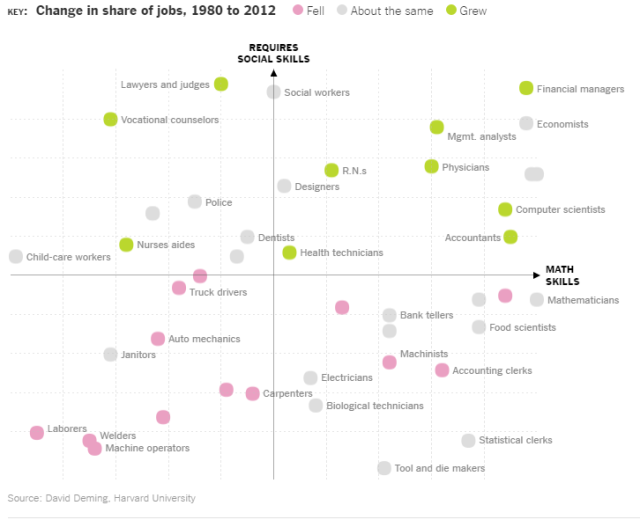 Deming shows that in recent years, many jobs requiring only mathematical skills have been automated. Bank tellers and statistical clerks have suffered.

Roles which require predominantly social skills (childcare workers, for example) tend to be poorly paid as the supply of potential workers is very large.

The study shows that workers who successfully combine mathematical and interpersonal skills in the knowledge-based economies of the future should find many rewarding and lucrative opportunities.

Refocusing skills education
The challenge now, says Deming, is for educators to complement their teaching of technical skills like mathematics and computer science, with a focus on making sure the workers of the future have the soft skills to compete in the new jobs market.