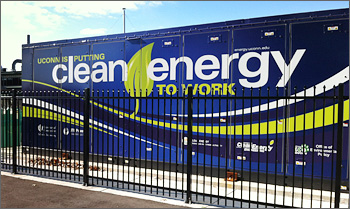 The researchers determined a way to improve one of the primary failure points for the fuel cell, overcoming key issues that have hindered its acceptance. Their work is featured on the cover of the latest issue of Journal of Physical Chemistry C.

Fuel cells offer a clean and highly efficient way to convert the chemical energy in fuels directly into electrical energy. They are similar to batteries in that they have an anode, cathode and electrolyte and create electricity, but they use fuel to create a continuous flow of electricity.

Fuel cells can be about four times more efficient than a combustion engine because they are based on electrochemical reactions, but researchers continue to struggle with making them cheaply and efficiently enough to compete with traditional power generation sources.

An SOFC is made of solid materials, and the electricity is created by oxygen ions traveling through the fuel cell. Unlike other types of fuel cells, SOFCs don’t require the use of expensive metals, like platinum, and can work with a large variety of fuels, such as gasoline or diesel fuel.

When gasoline is used for fuel, however, a carbon-based material tends to build up in the fuel cell and stop the conversion reaction. Other chemicals, in particular sulfur, can also poison and stop the reactions.

In their study, the WSU researchers improved understanding of the process that stops the reactions. Problems most often occur at a place on the anode’s surface, called the triple-phase boundary, where the anode connects with the electrolyte and fuel.

The researchers determined that the presence of an electric field at this boundary can prevent failures and improve the system’s performance. To properly capture the complexity of this interface, they used the Center for Nanoscale Materials supercomputer at the Argonne National Laboratory to perform computations.

The researchers studied similar issues in solid oxide electrolysis cells (SOECs), which are like fuel cells that run in reverse to convert carbon dioxide and water to transportation fuel precursors.

The work provides guidance that industry can eventually use to reduce material buildup and poisoning and improve performance of SOFCs and SOECs, said Jean-Sabin McEwen, assistant professor in the Gene and Linda Voiland School of Chemical Engineering and Bioengineering, who led the project.

The research is in keeping with WSU’s Grand Challenges, a suite of research initiatives aimed at large societal issues. It is particularly relevant to the challenge of sustainable resources and its theme of energy.

The above post is reprinted from materials provided byWashington State University. Note: Materials may be edited for content and length.