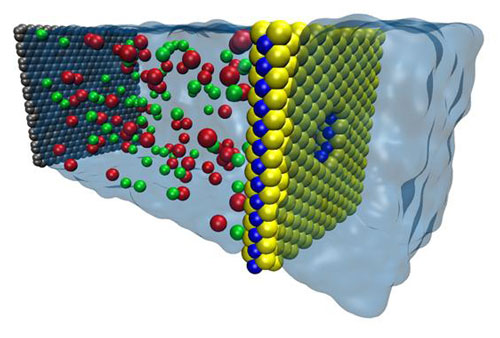 The right blend of polymers enables rapid and molecule-selective filtering of tiny particles from water.

A method of fabricating polymer membranes with nanometer-scale holes that overcomes some practical challenges has been demonstrated by KAUST researchers.

Porous membranes can filter pollutants from a liquid, and the smaller the holes, the finer the particles the membrane can remove. The KAUST team developed a block copolymer membrane with pores as small as 1.5 nanometers but with increased water flux, the volume processed per hour by a membrane of a certain area.

A nanofilter needs to be efficient at rejecting specific molecules, be producible on a large scale, filter liquid quickly and be resistant to fouling or the build-up of removed micropollutants on the surface.

Block copolymers have emerged as a viable material for this application. Their characteristics allow them to self-assemble into regular patterns that enable the creation of nanoporous materials with pores as small as 10 nanometers.

However, reducing the size further to three nanometers has only been possible by post-treating the membrane (depositing gold, for example2). Moreover, smaller holes usually reduce the water flux.

Klaus-Viktor Peinemann from the KAUST Advanced Membranes & Porous Materials Center and Suzana Nunes from the KAUST Biological and Environmental Science and Engineering Division formed a multidisciplinary team to find a solution.

“We mixed two block copolymers in a casting solution, tuning the process by choosing the right copolymer systems, solvents, casting conditions,” explained Haizhou Yu, a postdoctoral fellow in Peinemann’s group. This approach is an improvement on alternatives because it doesn’t require material post-treatment.

Peinemann and colleagues blended polystyrene-b-poly(acrylic acid) and polystyrene-b-poly(4-vinylpyridine) in a ratio of six to one. This created a sponge-like layer with a 60 nanometer film on top. Material analysis showed that nanoscale pores formed spontaneously without the need for direct patterning1.

The researchers used their nanofiltration material to filter the biological molecule protoporphyrin IX from water. The filter simultaneously allowed another molecule, lysine, to pass through, demonstrating its molecular selectivity. The researchers were able to filter 540 liters per hour for every square meter of membrane, which is approximately 10 times faster than commercial nanofiltration membranes.

The groups teamed up with Victor Calo from the University’s Physical Science and Engineering Division to develop computer models to understand the mechanism of pore formation. They showed that the simultaneous decrease in pore size and increase in flux was possible because, while the pores are smaller, the pore density in the block copolymer is higher.

“In the future, we hope to optimize membranes for protein separation and other applications by changing the copolymer composition, synthesizing new polymers and mixing with additives,” said Nunes.

The above post is reprinted from materials provided by KAUST – King Abdullah University of Science and Technology. Note: Materials may be edited for content and length.