The company states that the ultimate goal is water desalination, but more feasible and immediate uses can be found in the oil and gas industry, where the requirements in terms of the quality of the graphene and hole sizes are less challenging. 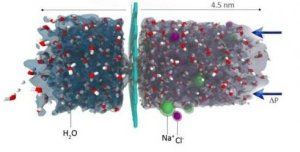 Lockheed Martin is working with two firms in the oil and gas industry to assess the feasibility of using Perforene filters to clean drilling wastewater. The aim is not the total elimination of contaminants but targeting the worst of them, making the problem more manageable. This goal only requires 50-100 nanometer sized holes, compared to 1 nanometer holes required for desalination.

The company claims that commercialization of Perforene filters could begin in the next five years, possibly with some sort of medical device that would only require small amounts. Finding a way to produce graphene with single nanometer-sized holes on a commercial scale for desalination would probably take five or more years. The company has tested it only on a small scale, but the results were promising.

Lockheed is not ready to commercialize this technology yet. They are still refining the process for making the holes in graphene, and also the production process of the graphene itself. They had expected to have a prototype filter by the end of 2013. This prototype will be a drop-in replacement for current filters used in reverse osmosis (RO) plants. They hope to commercialize this technology by 2014-2015 and are looking for partners in the filter manufacturing arena.

This is not the first time we hear of water desalination using graphene membranes. In June 2012 MIT scientists have shown (in simulations) that nanoporous graphene can filter salt from water at a rate that is 2-3 orders of magnitude faster than today’s best commercial RO desalination technology. Back in October 2010 researchers from Australia and Shanghai have developed a Capacitive Deionization (CDI) application that uses graphene-like nanoflakes as electrodes (CDI is a relatively new way to purify water). Earlier in 2010 Korean researchers have made a new type of composite material made from reduced graphene oxide and magnetite that could effectively remove arsenic from drinking water.

In 2013, Lockheed Martin developed a water desalination technology with nanometer-sized holes, with hopes of commercialization around 2014-2015.