A Ph.D. student at the University of Southern California (USC) Viterbi Ming Hsieh Department of Electrical Engineering, Kun Yue, is developing a model of selected brain circuits to study multiple sclerosis (MS) in an effort to develop a nanotechnology based treatment for the disease. Yue believes that new technology can lead to improvement in the quality of life of people who suffer from chronic debilitating neural diseases.

“There is no known cure for many of the most debilitating neural diseases,” such as MS, Kun Yue explained. “New technology can ease people’s suffering.” Supported by a 2014 Research Enhancement Fellowship awarded by the USC Graduate School and under the guidance of Professor Alice Parker, leader of the USC BioRC Project, Yue has embraced the challenge of creating a treatment suitable for diseases such as MS using nanotechnology. 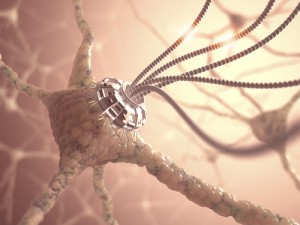 “Nano medicine is popular, but not many are working on it because few universities have the resources for the interdisciplinary work. USC is one of the universities that does,” explained Yue. His work will be integrated into his mentor project on reverse engineering of the brain, which was proposed by the National Academy of Engineering. In addition to electrical engineers, Yue will also work with USC’s experts in neuroscience, medicine, and pharmacology.

Yue began his project by creating an electrical circuit model of selected brain circuits, allowing the research team to gain a better understanding of multiple sclerosis functioning in the human brain. This preliminary approach was designed to help pave the way toward developing medical treatments using nanotechnology, which may have major implications in the comprehension and treatment of neurological disorders such as MS.

Currently, treating most of the chronic debilitating neural diseases involves deep brain stimulation, which requires the implantation of an electrode inside the brain through an invasive surgery. However, if Yue succeeds in using nanotechnology, physicians may be able to achieve the same results without the risk of major surgery.