A new discovery will make it possible to create pixels just a few hundred nanometres across that could pave the way for extremely high-resolution and low-energy thin, flexible displays for applications such as ‘smart’ glasses, synthetic retinas, and foldable screens.

A team led by Oxford University scientists explored the link between the electrical and optical properties of phase change materials (materials that can change from an amorphous to a crystalline state). They found that by sandwiching a seven nanometre thick layer of a phase change material (GST) between two layers of a transparent electrode they could use a tiny current to ‘draw’ images within the sandwich ‘stack’.

Initially still images were created using an atomic force microscope but the team went on to demonstrate that such tiny ‘stacks’ can be turned into prototype pixel-like devices. These ‘nano-pixels’ — just 300 by 300 nanometres in size — can be electrically switched ‘on and off’ at will, creating the coloured dots that would form the building blocks of an extremely high-resolution display technology.

A report of the research is published in this week’s Nature.

‘We didn’t set out to invent a new kind of display,’ said Professor Harish Bhaskaran of Oxford University’s Department of Materials, who led the research. ‘We were exploring the relationship between the electrical and optical properties of phase change materials and then had the idea of creating this GST ‘sandwich’ made up of layers just a few nanometres thick. We found that not only were we able to create images in the stack but, to our surprise, thinner layers of GST actually gave us better contrast. We also discovered that altering the size of the bottom electrode layer enabled us to change the colour of the image.’ 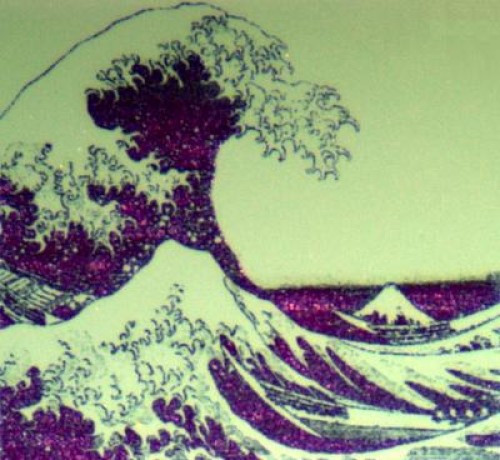 Oxford University technology can draw images 70 micrometers across, each image is smaller than the width of a human hair. The researchers have shown that using this technology they can create ‘nano-pixels’ just 100 nanometers in size that could pave the way for extremely high-resolution and low-energy thin, flexible displays for applications such as ‘smart’ glasses, synthetic retinas, and foldable screens.

Whilst the work is still in its early stages, realising its potential, the Oxford team has filed a patent on the discovery with the help of Isis Innovation, Oxford University’s technology commercialisation company. Isis is now discussing the displays with companies who are interested in assessing the technology, and with investors.

The layers of the GST sandwich are created using a sputtering technique where a target is bombarded with high energy particles so that atoms from the target are deposited onto another material as a thin film.

‘Because the layers that make up our devices can be deposited as thin films they can be incorporated into very thin flexible materials — we have already demonstrated that the technique works on flexible Mylar sheets around 200 nanometres thick,’ said Professor Bhaskaran. ‘This makes them potentially useful for ‘smart’ glasses, foldable screens, windshield displays, and even synthetic retinas that mimic the abilities of photoreceptor cells in the human eye.’

Peiman Hosseini of Oxford University’s Department of Materials, first author of the paper, said: ‘Our models are so good at predicting the experiment that we can tune our prototype ‘pixels’ to create any colour we want — including the primary colours needed for a display. One of the advantages of our design is that, unlike most conventional LCD screens, there would be no need to constantly refresh all pixels, you would only have to refresh those pixels that actually change (static pixels remain as they were). This means that any display based on this technology would have extremely low energy consumption.’

The research suggests that flexible paper-thin displays based on the technology could have the capacity to switch between a power-saving ‘colour e-reader mode’, and a backlit display capable of showing video. Such displays could be created using cheap materials and, because they would be solid-state, promise to be reliable and easy to manufacture. The tiny ‘nano-pixels’ make it ideal for applications, such as smart glasses, where an image would be projected at a larger size as, even enlarged, they would offer very high-resolution.

Professor David Wright of the Department of Engineering at the University of Exeter, co-author of the paper, said: ‘Along with many other researchers around the world we have been looking into the use of these GST materials for memory applications for many years, but no one before thought of combining their electrical and optical functionality to provide entirely new kinds of non-volatile, high-resolution, electronic colour displays — so our work is a real breakthrough.’

The phase change material used was the alloy Ge2Sb2Te5 (Germanium-Antimony-Tellurium or GST) sandwiched between electrode layers made of indium tin oxide (ITO).