“Advances in nanotechnology will lead to higher efficiencies and lower costs, and these can and likely will be significant,” explains Matt Beard, a senior scientist for the U.S. Department of Energy‘s National Renewable Energy Laboratory (NREL). “In fact, nanotechnology is already having dramatic effects on the science of solar cells.”

Nearly 60 years after researchers first demonstrated a way to convert sunlight into energy, science is still grappling with a critical limitation of the solar photovoltaic cell.

It just isn’t that efficient at turning the tremendous power of the sun into electricity.

And even though commercial solar cells today have double to four times the 6 percent efficiency of the one first unveiled in 1954 by Bell Laboratories in New Jersey, that hasn’t been sufficient to push fossil fuel from its preeminent place in the world energy mix.

But now, alternative energy researchers think that something really small—nanotechnology, the engineering of structures a fraction of the width of a human hair—could give a gigantic boost to solar energy. (Related Quiz: “What You Don’t Know About Solar Power“)

“Advances in nanotechnology will lead to higher efficiencies and lower costs, and these can and likely will be significant,” explains Matt Beard, a senior scientist for the U.S. Department of Energy’s National Renewable Energy Laboratory (NREL). “In fact, nanotechnology is already having dramatic effects on the science of solar cells.”

Of course, the super-expensive solar arrays used in NASA’s space program are far more efficient than those installed on rooftops. (Related: “Beam It Down: A Drive to Launch Space-Based Solar“) And in the laboratory, scientists have achieved record-breaking efficiencies of more than 40 percent. But such contests are a testament to the gap between solar potential and the mass market cells of today. 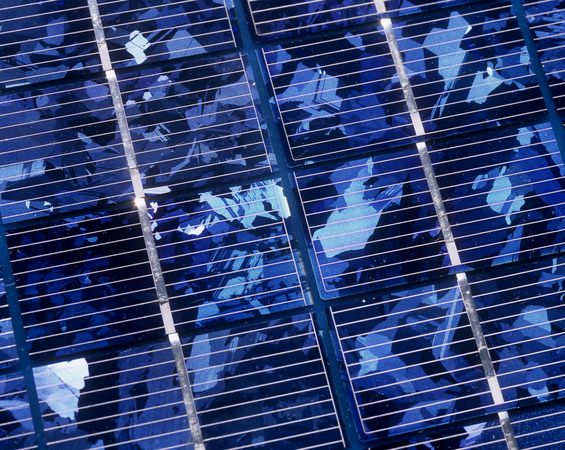 The light glinting off the surface of this solar photovoltaic cell signifies lost efficiency. Scientists are looking to nanotechnology to boost solar power, including by reducing the amount of sunlight that silicon wastes through reflection.

The power output of the Sun that reaches the Earth could provide as much as 10,000 times more energy than the combined output of all the commercial power plants on the planet, according to the National Academy of Engineering. The problem is how to harvest that energy.

Today’s commercial solar cells, usually fashioned from silicon, are still relatively expensive to produce (even though prices have come down), and they generally manage to capture only 10 to 20 percent of the sunlight that strikes them. This contributes to the high cost of solar-generated electricity compared to power generated by conventional fossil-fuel-burning plants. By one comparative measure, the U.S. Energy Information Administration estimated the levelized cost of new solar PV as of 2012 was about 56 percent higher than the cost of generation from a conventional coal plant.

Nanotechnology may provide an answer to the efficiency problem, by tinkering with solar power cells at a fundamental level to boost their ability to convert sunlight into power, and by freeing the industry to use less expensive materials. If so, it would fulfill the predictions of some of nanotechnology’s pioneers, like the late Nobel physicist Richard Smalley, who saw potential in nanoscale engineering to address the world’s energy problems. (See related: “Nano’s Big Future“) Scientists caution that there’s still a lot of work ahead to overcome technical challenges and make these inventions ready for prime time. For example, more research is needed on the environmental, health, and safety aspects of nano-materials, said the National Academy of Sciences in a 2012 report that looked broadly at nanotechnology, not at solar applications in particular. (Related Pictures: “Seven Ingredients for Better Car Batteries.”)

But Luke Henley, a University of Illinois at Chicago chemistry professor who received a 2012 National Science Foundation grant to develop a solar-related nanotechnology project, predicts there will be major advances over the next five to 10 years. “It’s potentially a game changer,” he says. Here are five intriguing recent nanotechnology innovations that could help to boost solar power.

To reduce the amount of sunlight that is reflected away from silicon solar cells and wasted, manufacturers usually add one or more layers of antireflective material, which significantly boosts the cost. But late last year, NREL scientists announced a breakthrough in the use of nanotechnology to reduce the amount of light that silicon cells reflect. It involves using a liquid process to put billions of nano-sized holes in each square inch of a solar cell’s surface. Since the holes are smaller than the light wavelengths hitting them, the light is absorbed rather than reflected. The new material, which is called “black silicon,” is nearly 20 percent more efficient than existing silicon cell designs. (Related photos: “Spanish Solar Energy“)

Organic solar cells, made from elements such as carbon, nitrogen, and oxygen that are found in living things, would be cheaper and easier to make than current silicon-based solar cells. The tradeoff, until now, is that they haven’t been as efficient. But a team of Princeton University researchers, led by electrical engineer Stephen Chou, has been able to nearly triple the efficiency of solar cells by devising a nanostructured “sandwich” of metal and plastic. In technical lingo, their invention is called a plasmodic cavity with subwavelength hole array, or PlaSCH. It consists of a thin strip of plastic sandwiched between a top layer made from an incredibly fine metal mesh and a bottom layer of the metal film used in conventional solar cells.

All aspects of the solar cell’s structure—from its thickness to the spacing of the mesh and diameter of the holes—are smaller than the wavelength of the light that it collects. As a result, the device absorbs most of the light in that frequency rather than reflecting it. “It’s like a black hole for light,” Chou explained in a Princeton press release in December. “It traps it.” Another plus: researchers say the PlaSCH cells can be manufactured cost-effectively in sheets, using a process developed by Chou years ago that embosses the nanostructures over a large area, similar to the way newspapers are printed.

One of the big difficulties in coming up with more energy-efficient solar cells is the limitations of the researchers’ own imaginations. But in a January 2013 article published in Scientific Reports, Northwestern University mechanical engineering professor Wei Chen and graduate student Cheng Sun introduced a method that might be superior to human brainstorming. Using a mathematical search algorithm based on natural biological evolution, they took dozens of design elements and then “mated” them over a series of 20 generations, in a process that mimicked the evolutionary principles of crossover and genetic mutation.

“Our approach is based upon the biologically evolutionary process of survival of the fittest,” Chen explained in an article on Northwestern University’s website.

The result: An evolution-inspired organic solar cell—that is, one that uses carbon-based materials rather than silicon crystals–in which light first enters a 100-nanometer-thick scattering layer with an unorthodox geometric pattern. The researchers say this should enable it to absorb light more efficiently. The U.S. Department of Energy’s Argonne National Laboratory will fabricate an actual working version of the new cell for testing.

We’re used to thinking of solar energy as something that we collect with panels. But even the latest-generation silicon panels can take in light from only a relatively narrow range of frequencies, amounting to about 20 percent of the available energy in the sun’s rays. The panels then require separate equipment to convert the stored energy to useable electricity. But researchers at the University of Connecticut and Penn State  are working on an entirely new approach, using tiny, nanoscale antenna arrays, which would take in a wider range of frequencies and collect about 70 percent of the available energy in sunlight. Additionally, the antenna arrays themselves could convert that energy to direct current, without need for additional gear.

Scientists have been thinking about using tiny antennae for a while, but until recently, they lacked the technology make them work, since such a setup would require electrodes that were just one or two nanometers apart—about 1/30,000 the width of a human hair. Fortunately, University of Connecticut engineering professor Brian Willis has developed a fabrication technique called selective area atomic-layer deposition, which makes it possible to coat the electrodes with layers of individual copper atoms, until they are separated by just 1.5 nanometers. “This new technology could get us over the hump and make solar energy cost-competitive with fossil fuels,” Willis explained in February. “This is brand new technology, a whole new train of thought.”

No matter what sort of solar energy-collecting technology you employ, there’s still the problem of building a bunch of the devices and hooking them up in places with sun exposure. But University of Southern California chemistry professor Richard L. Brutchey and postdoctoral researcher David H. Webber have devised a technology that could turn a building into a solar collector.

They’ve created a stable, electricity-conducting liquid filled with solar-collecting nanocrystals, which can be painted or printed like an ink onto surfaces such as window glass or plastic roof panels. The nanocrystals, made of cadmium selenide instead of silicon, are about four nanometers in size—about 250 billion of them could fit on the head of a pin—so they are capable of floating in a liquid solution.  (Related Pictures: “A New Hub for Solar Tech Blooms in Japan“)

Brutchey’s and Webber’s secret to getting the technology to work? Finding an organic molecule that could attach to the nanocrystals and stabilize them and prevent them from sticking together, without hindering their ability to conduct electricity.

The researchers aim to work on nanocrystals built from materials other than cadmium, a toxic metal. “While the commercialization of this technology is still years away, we see a clear path forward toward integrating this into the next generation of solar cell technologies,” Brutchey says. (Related video: “Toxic Land Generates Solar Power“)

5 comments on “Sun Plus Nanotechnology: Can Solar Energy Get Bigger by Thinking Small?”